What is an earwig? 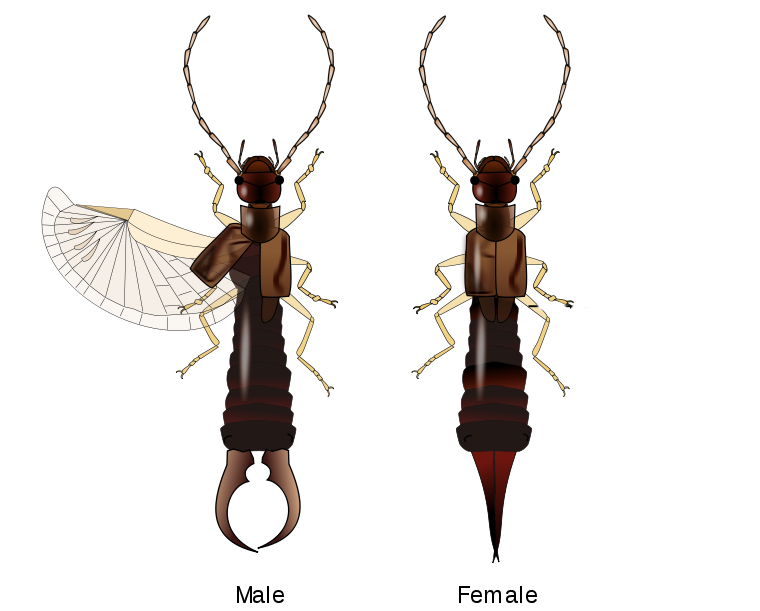 Listen Up! Facts About Earwigs

Do earwigs crawl into ears?

The hype around earwigs crawling into ears is just hype.  Even though they – like many other bugs – could technically fit in an ear, they do not seek ears or lay eggs in brains.  That’s just the stuff of horror movies.

A human ear is not a good environment for them and those ugly pinchers are for fending off other earwigs.  They’re not strong enough to cut through your skin, muscles or bones.  What a relief!

With a name like earwig it sounds like the stories could be true, but the name earwig comes from the shape of their hindwings, which resemble a human ear when unfolded.  The species name of the common earwig, auricularia, is a specific reference to this feature.

The common name “earwig” is thought by most etymologists to come from two Old English words (eare wicga) which means “ear insect.”  The French refer to them as perce-oreille, or ear piercer. Germans call them Ohrwurm, which means ear worm. And, the Russians call them ukhovertka, or ear turner.

Even though they don’t like human ears, they are considered a pest because of the damage they do to crops, their slightly freakish appearance, and their tendency to invade crevices in homes and consume pantry foods.

WHAT IS AN EARWIG?

Earwigs are simple, nocturnal creatures with a taste for plant life and small insects.

They are quick to scurry away when disturbed and mostly munch on sprouts and decaying vegetation, though some species eat plants and other insects.

Earwigs are identified by their small bodies (5 to 25mm) equipped with two wings and pincers at their rear.  Although a bit scary looking, the pincers are no cause for alarm as they are used for defense against other earwigs and don’t produce poison or disease. Most prefer to live in wet areas like logs and mulch where it is cooler, and they can be undisturbed.  Sometimes they will gather under items left outside.  Because they are attracted to light, they can become a nuisance on porches.

You might find an earwig slinking around your home looking for food or because of a change in the weather.  Most often you will find them near water sources (kitchen, bathroom, laundry room). While you might spot them in any room, infestations are rare.

The best approach to maintaining a bug free home or ridding one of earwigs and other pests is to periodic pest control treatments. May Exterminating can help you through the whole process from inspection, identification, to control.

Earwigs won’t hurt you, but May Exterminating pest control services will keep you and your loved ones feeling safe in your home.