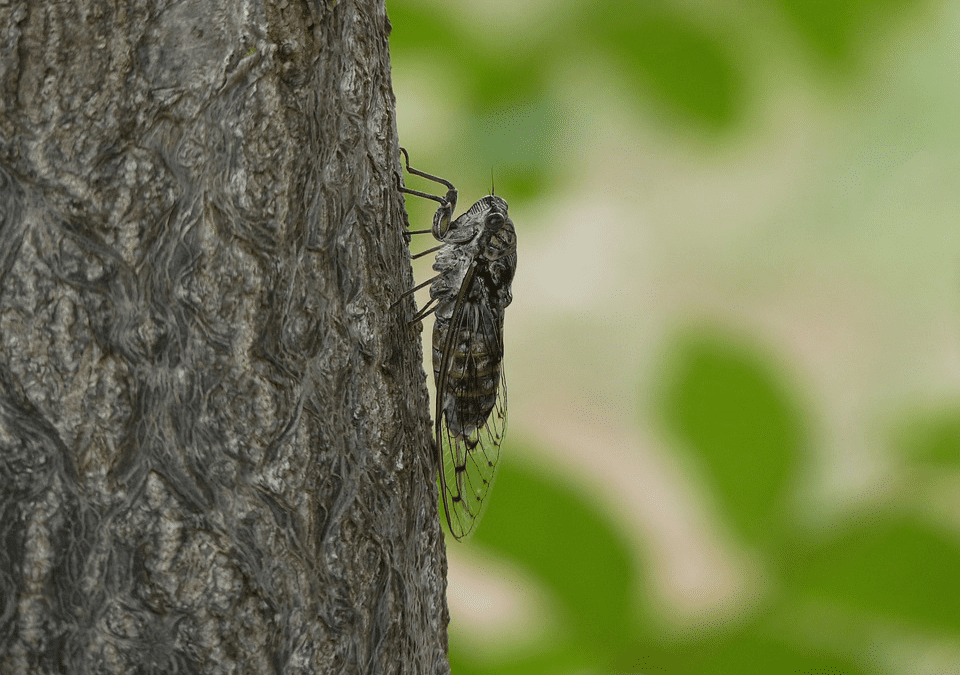 A cicada is an insect best known for its song.  You’ve probably heard the cicada’s song in the middle of the summer.  They’re the official nature soundtrack of summer.

How Do Cicadas Make that Sound?

Their abdomen is mostly hollow and using their tymbals – a membrane in a male cicada that acts like a kettle drum – they flex a muscle to create their sounds.  Females do not have tymbals, but sometimes make a clicking sound with their wings.  Click here to hear a recording of cicada sounds.

The sounds are designed to attract mates.  Adult cicadas typically live in trees, feeding on sap.  After mating, eggs are deposited onto tree bark, often into slits or cuts made by the female.  After hatching, the young nymphs will drop to the ground and bury themselves.  Depending on the species, the cicada could stay underground from 2-17 years!

After a period of time, the late nymph emerges and begins to shed its exoskeleton, expand its wings and begin a short adult life.

●       Cicadas species emerge at different numbers of years.  Some emerge in as few as two years, and others may not emerge for up to 17 years.

●       Cicadas eat mostly tree fluids, and due to this ingestion of fluid, you may occasionally see a cicada “pee” from a tree.

●       In some countries, people eat cicadas.  There is cicada gumbo, fried nymphs, cicada ice cream, and even cicada pineapple mixes that many cultures enjoy.  Would you eat a cicada?

●       Don’t be surprised if a cicada tries to keep you company when you’re using a power tool.  The sound mimics closely to their own song and can attract the critters.

Cicadas eyes can be multiple assorted colors depending on the breed.  Some can be white, black, green, and even bright red!

●       There are billions of 17-year cicadas.  Their numbers are high so the species can overwhelm predators eating them and their numbers don’t dwindle.  Each 17-year cycle, billions of cicadas emerge and can sometimes create problems for young trees or food crops.

●       While often called a “locust” by many southern folk, a cicada is most definitely not a locust.  A locust is a grasshopper, and its body is quite different than a cicada.

At least 13 species of annual cicadas are native to North Carolina and sing every summer.  Enjoy the summer love song.  These are not “bugs” that bite.